The best portion of a good man’s life is his little, nameless, unremembered acts of kindness and of love.

Our William is a beautiful black Friesian cross steer. He came to us with his half-brother Jonathon, from a local dairy, otherwise destined, just days old, to the trucked to the markets and onto the abattoir as unwanted by products of the dairy industry.

William was initially bottle raised and then fostered by La Mode, a diminutive Jersey cow, who adores and dotes on her two strapping sons.

William lives with our herd of nine rescue cattle, always the first up to the fence for lucerne, loves to put his nose through the car window to lick us with a large raspy tongue, loves a head scratch, still looks out for his ‘Mum’ La Mode, and is a most impressive sight as he gallivants like a puppy, around the 4WD when feed is delivered.

And William is BIG. His shoulder stands at 6ft and he weighs in at nearly a tonne.

So it was with great concern we watched one of his horns, that had grown downwards, gradually curve in towards his face.

Obviously it would need attention, but what was the safest option? William, though docile, would not stand still for us to cut off the end of his horn, and he is far too big for our modest cattle restraint (‘crush’), or indeed those of any local farmers.

Our only option was to call upon the services of Manfred, from Five Freedoms Rescue. Manfred is an expert with a tranquiliser darts and in the darting of wildlife and domestic animals. Importantly he has had experience with darting ruminants, a high risk group.

The weather has been against us proceeding as it is best not to sedate cattle in very cold weather. Finally this week the weather eased, Manfred was available, and we had help on hand to assist.

Our first requirement was to consult with our vets to confirm dosages, the best procedure for removing the horn tip, and the care for William during sedation.

Next we moved William into a small ‘run’, where the procedure could take place.

Dosages are not an exact science in this field. Too little and William could react badly and just become unmanageable, too much and he could be too deeply sedated and be at risk of aspiration and other complications.

We were also aware of the need to William to have his head higher than his rumen. if he lay down, that it was preferable to be on his left side, and to be best in a ‘recovery’ position of sitting upright on his chest……sounds easy….but not when you are dealing with a one tonne patient………………..

The team had a briefing together on the process and headed off. Hampered by recent knee surgery, I had to stay behind, which personally I found more nerve wracking, imagining what was going on.

William was quietly contemplating the recent delivery of round bales when the team arrived. Obligingly he turned his rump and presented an ample target for Manfred to aim for with the tranquiliser dart.

Manfred is a true marksman and the dart hit the spot.

William must have read the text book.

Visibly drowsy he walked over to the closest round bale, and rested his head on top…making sure his head was above his rumen….

Then he moved slowly and deliberately between the two rounds, and settled, on his left side, sitting on his chest, in perfect recovery position……

The team waited 3o minutes for the sedation to take full effect, moved in and quickly removed the offending horn tip. Note the horn itself has a very good blood supply but no nerve endings.

The open end of the horn was treated and sealed while William dozed. 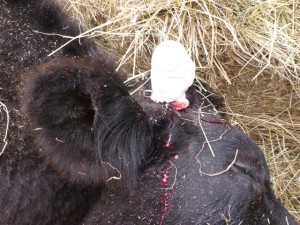 And then my favourite part, as the team wanted to make sure William did not have any problems with bloat after the procedure, they massaged his tummy, for the next hour until he began to awake.

Now they are sure, and I am certain, that during this time a bleary eye occasionally took a peek, and quickly closed again. William would be LOVING that tummy rub!!!! 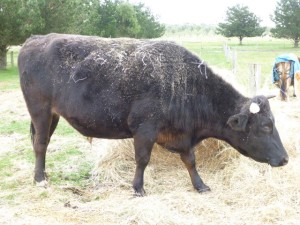 William roused himself, probably worried that the others were eating all the hay, and made a full and swift recovery.

Our thanks to everyone who helped out, our vet practice for their advice and loan of required cutting wire, to local cattle carers for advice re weight, to Keith and Chris for their time and practical assistance, and to Manfred, as always, the consummate professional, careful, considered and compassionate….small acts of kindness and love, that have made a huge difference to our ‘tonne of love’.

This entry was posted in Cattle and tagged cattle. Bookmark the permalink.