Ever since becoming aware of our new arrival’s story, The Beatle’s song ‘When I’m Sixty Four’, ran in my head. I was not surprised today, as I manoeuvred the horse float into position to collect him, to see the house number ’64’ opposite.

In our district is the stock truck route from the Ballarat Saleyards to the largest abattoir in central Victoria. On certain days of the week, huge B doubles hurtle along the highways, swinging wide on corners, crammed full of sheep. Even as I stepped from my vehicle this afternoon, a truck drove past, with a sheep wildly struggling on the top deck, two thirds of his body protruding up from the sheep surrounding him or her.  I could see sheep on their sides, legs protruding as the truck sped past.

Hundreds of sheep being taken to a dreadful death…while we gathered to save the life of just one.

On the weekend I was advised of a social media post regarding a ram who had appeared in a local town. This town is directly on the stock truck route. Emaciated and clearly aged, the ram was marked for death on his back. This dear old soul, having been of commercial use until now, had been loaded on a truck and  sent for slaughter.

Although he did not know it his guardian angel now came to his aid. He came off the truck en route …and luckily near people who would care for him until a place of safety could be found. His tags were traced to his breeder, but his subsequent owner did not step forward to claim him. It is likely he had been on sold to the abattoir. 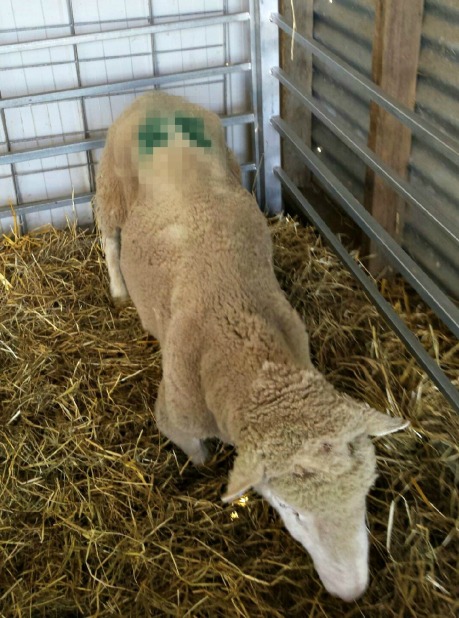 His tags show him to be 11 years old……a good age for a sheep…but he was not allowed to live out his days, instead he was subject to terror and fear.

Thankfully, Paul, as he is now called, instead has come to us. We have him in a shelter at present. He appears in reasonable health, although he needs to gain some weight and strength. All being well, he will have a small operation, so he can join the special needs flock.

A huge thank you to those who took him into care and kept him safe.

This entry was posted in Sheep and tagged animal rescue, sheep. Bookmark the permalink.