Two weeks ago I spotted a small cow/bull/steer in the local council pound. He/she looked forlorn and lost.

It preyed on my mind and I called one of the rangers to enquire and was told it was a bull who would be up for sale by tender in the following weeks.

My heart sank…we cannot take a bull, even a small bull…and I could not imagine anyone else being able to.

On driving past again I decided to approach the bull to get a feel as to his temperament. As I stood at the fence he immediately came over, hesitated for a moment, then came up for a head scratch.  He is friendly, and affectionate and just looking for someone to be his friend.

He is so friendly that it is very likely he has been bottle raised, But, as often happens he has not been castrated and has probably got out , or been abandoned, as he became more challenging to care for as a bull.

I knew I could not walk away so I started to so some research. Yes he could be surgically castrated but I would need access to a cattle ‘crush’ to restrain him safely for the anaesthetic.

Then our first stroke of luck. I contacted another rescue organisation who cares for two cattle and asked if they could provide a home.  After some consideration they replied that, if castrated, they could.

Next I made enquiries re the logistics of transport and facilities for the surgery. There were options but all involving a lot of money. Then a friend offered her facilities to take in the bull, utilise her vet to do the procedure, and to transport him to his new home.

Next a local farmer agreed to give us the use of a stock trailor for transport.

The vet provided a reasonable quote.

Now we just need to raise the funds for his purchase and for the cost of castration. Out target is $500.

So please meet Martin. Without us it is very likely he will be sent for slaughter.

If you have a soft spot for this lovely man and would like to assist please contact us re contributing to save him. 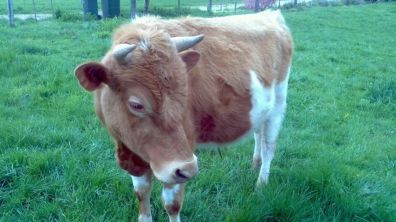 To say I was devastated would be an understatement.

It has been nearly four weeks in the quest to save Martin, and after a wait of over two weeks to find out the result of the tender.

Today as I comforted Saffron and waited for the vet in the windswept paddock, I received the long awaited e mail. I truly believed we had been successful and it was only a matter of time before we would be told Martin was legally ‘ours’

Then I read that we had lost the tender and Martin was not ours…would not be ‘Martin’….he had been purchased to be sold on later…….I just crashed…

There was a small lifeline. The successful bidder had agreed to give out his telephone number and was okay for me to call him.

I left a message, contacted BAWCS , and a supporter who had offered to assist if further funds were needed.

My priority was Saffron and the next hours were spent with her and the terrible grief at losing her.

Late this afternoon I drove to town and went to see Martin. I promised him I would do everything I could. I kept trying the ‘phone number and finally managed to contact the successful bidder.

These are always delicate negotiations and you can imagine my delight when he readily agreed to on sell, having been advised by the ranger that I was wanting Martin as a ‘pet’. Then, to my relief, he only asked for the amount he had tendered, which was a wonderful gesture.

I went back to Martin, and hearing me he came over to the fence, gave me a big lick and enjoyed a scratch behind the ears, the same I had been doing with Saffron just hours before.

And the deep weight of despair lifted.

Thank you Martin, thank you to all of the wonderful team supporting Martin…..and thank you Saffron for working your magic from over the ‘bridge, .and so the new journey begins

This entry was posted in Uncategorized. Bookmark the permalink.