To see the wonderful transformation of Rosie click on the link below…..

The transformation of Rosie

In April 2011 we were preparing for the first visit to Australia of Virginie Bernhard, a Swiss ‘freedom’ horse trainer, . Virginie was to be based at our property and this was a fantastic opportunity for her to work with our rescue horses so we decided to rescue two more in time for her visit. http://www.winchikala.com

A great (and courageous) friend went to a well-known knackery on a mission to bring out two horses, one for her rescue organisation,  and one for us, in time to enable Virginie to work with us and share her invaluable knowledge. The pony who came to us was Sally. See her story https://honeyspledge.org/?s=sally.  The other was Chico who joined Sally in the paddock.

My friend specialises in standard bred rescue and rehabilitation. When at the knackery yards she noticed a number of standardbreds in the yards, two with leg injuries.

The following week, when she returned to the knackery, these two standardbreds were still there. We learned they had been in the yards, witnessing all of the horrors of the knackery, for at least two weeks. Two weeks of watching other horses being forced into the shute, of shooting and dismembering, the blood, the fear, the stench. Waiting their turn. 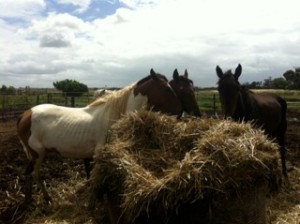 Rosie at the knackery with Chico and other

I asked my friend to purchase one of the standardbreds. I wish we could have taken more, all, every single terrified animal there.  She chose the youngest, and on the float drive home rang me to tell me she was a ‘little filly’.’

It was nearing dusk as the float pulled in, and we unloaded the filly. She was thin and underdeveloped, absolutely covered in bites and kick marks, with rain scald, and with an old, obviously untreated wound, to her hind leg. On checking her brand we found she was only just 2 years old, and did not have a name. She had obviously been sent to the sales or direct to the knackery as she was unsuited to racing.

My young daughter was with us, and immediately she asked that the young filly be named ‘Rosie’.

The first touching moment was seeing Chico, who had been at the knackery with Rosie until the previous week, recognise her and come to the fence with a whinny of welcome. I hope he was telling Rosie not to be scared any more. 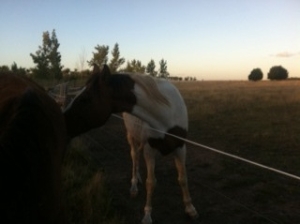 The second was two days later, when finally allowing herself to relax after the horror of the past weeks, we saw Rosie stretched out, in the fresh grass and sunshine, in a deep deep sleep.

Virginie did some initial work with Rosie but mainly we allowed her wounds to heal and for her to gain confidence in the paddock. Also, just weeks after the arrival of Rosie and Sally, we had five rescue horses and ponies arrive from a deceased estate, three of them needing very high levels of care.

One of these, the lovely mare, Jacqui, immediately ‘mothered’ Rosie, allowing her to share her feed bucket and keeping close by.

We moved Rosie up to the house paddock to allow more time for handling her, as she did not like anyone picking up her feet, especially her previously injured hind leg. One day I noticed a fracas near a large shed between Rosie and a pony over some hay. Like many horses who have experienced food deprivation, Rosie would get defensive about food.

Soon after I saw Rosie limping and going to check, found a horrific wound on the coronet band of her hind hoof, with arterial bleeding. Unable to get our usual vets,  I contacted a friend who recommended another practice close by. Luckily they were able to attend and were experienced with young unhandled horses. 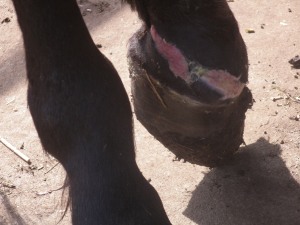 I could not work out how the wound had happened until days later I saw two holes in the shed wall. These were about 2 meters off ground level and showed, on kicking out, Rosie had put BOTH hooves through a solid corrugated iron wall. I felt sickened at what would have happened if she had not been able to release her hooves and how lucky we were that thr was not far more terrible wounds. 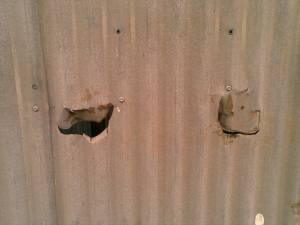 Holes in the corrugated iron shelter.

Fortunately there was no damage to Rosie’s tendons but she needed to be stabled to keep the dressings dry, and to have regular dressing changes. This presented a challenge. We received invaluable assistance from a local trainer and from experienced friends assisting with Rosie.

Rosie LOVED her stable and even when her leg had healed was very reluctant to give up the deep straw and shelter.

We were thrilled when a dear friend was willing to adopt both Jacqui and Rosie.. Our friend was studying the use of herbs to promote health and healing in horses, so Rosie was the beneficiary of this knowledge, as well as living in a loving home.

Rosie has developed and is now a stunningly healthy and happy horse. Affectionate and relaxed.

This rescue was only possible due to a number of people working together to their strengths. My friend who had the courage to go to the abattoir, Virginie and Pol who gave handling assistance. the vets who treated Rosie, my wonderful friend who gave Rosie a forever home and continued her rehabilitation.

The secret hidden Rose is now fully revealed in all her glory. 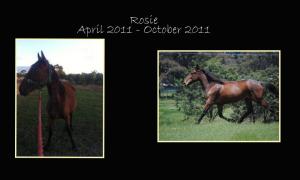 This entry was posted in Horses. Bookmark the permalink.